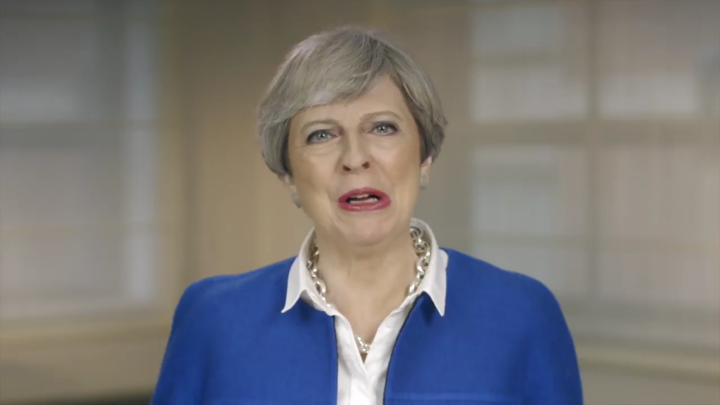 “The many … whom one chooses to call the people, are indeed a collection, but only as a multitude, a formless mass, whose movement and action would be elemental, irrational, savage, and terrible. […] Public opinion deserves to be esteemed as much as to be despised; to be despised for its concrete consciousness and expression, to be esteemed for its essential fundamental principle, which only shines, more or less dimly, through its concrete expression.”
― Georg Wilhelm Friedrich Hegel

What Theresa May represents is the final meaninglessness of parliamentary democracy. Destitution in the UK is prevalent with many relying on food banks to stay alive, services are being sold off to exploitative companies, housing is unaffordable and mental illness spreads like a malignance. Change is sought by the people. Media institutions and politicians largely have no solutions – they’re disarticulate, phatic and reactionary. Stare too long into our Prime Minister’s ghoulish face and it’s hard to tell what the point of all of this is. It’s a constant reminder that this world is not a sane or a rational place.

None of this was supposed to happen. Corbyn’s poor polling was alleged to remain static throughout the campaign and the Tory’s were going to win a significant, consolidating majority. This general election had been called precisely because Theresa May thought that she would appeal to the British public as a symbolic eclecticism of imperialism. She’d sit in cabinet meetings and boast of how she would be a proud mummy to this great empire. The UK under her leadership would subduct large areas of Europe and she’d spank the botty of anybody who questioned her authority and ‘difficult woman’ reputation which she’d assimilated for herself among colleagues. This is still how May presents herself and she still believes it. Now that she has to campaign in public, the factor which has changed is that the electorate are beginning to see the horrifying grimace on her face as the bile glugs back down her throat when she stops talking for a moment. They’re seeing how much she despises them, how utterly discomposed she is to be in their presence. To combat the Labour surge in the opinion polls, the Tories are relaunching their campaign, they need to transform her.

The Conservative Party’s campaign manager, Lynton Crosby, steps into a chamber filled with senior Tory officials. After some dull greetings and discussion, a member of the group stands up and says “Mr Crosby, the IRA terrorist sympathiser smear against Corbyn has largely been ineffectual – we’re losing ground, the poll gap is nowhere near as sizeable as it was when we called the election”. Crosby’s lips curl and he turns a shade of pink but this swiftly transitions into a glazed smile. “You’re right, this is a disaster” he says, “It’s different to how I imagined. Her reputation has superseded her abilities. She looks distinctly uncomfortable around the general public and she’s turning this campaign into a vanity project”. He paces toward the other side of the room, “Gentlemen, I know that you are all thinking ‘how do we turn this around?’ Well…” Crosby turns from the group and violently kicks an odd looking instrument, a great humanoid hunk of steampunk machinery with children coiled and sprawled into the mechanisms to operate the gears. The machine speaks, it’s sentient and it has an answer for them. As its creator, Lynton Crosby is the only one who understands it, only he can translate the dialect. The other men in the room, looking nervous, patiently await a solution for their campaign woes. “We’ve got it!” Crosby suddenly exclaims. He begins to sermonise, mostly-incomprehensible babble spews from his now foaming mouth “[…] We’re going to be focussing on Brexit and we’re now going to adopt the Labour campaign strategy of convincing video messages outlining our position, posted online for the public’s viewing”, he excitedly announces. “That’s how we will gain the assurances of our voters once again and the Prime Minister avoids the agonising contact with them!” The men in the room nod in unison and one by one begin to stand and applaud. Crosby signals at the door to the chamber and gleefully beckons “Come on in, girls!”, swim suit models hurriedly enter with champagne bottles and glasses. He presses a button on an old stereo system, pop music plays and the room breaks out into awkward flailing and celebratory handshaking.

Theresa May was next to appear on the Sky News programme, The Battle for Number 10. Throughout the campaign, she’d rejected one-on-one debate proposals with Jeremy Corbyn because her record in government is emphatically indefensible. Service cuts, big business favoured policy and a poorly handled Brexit process so far would all be easy targets for Corbyn. However, this programme was the Tory voter’s consolation prize, this was an opportunity to see their herald shine while being questioned and interviewed – who would believe it – in the same building as the Labour leader.

She arrived in the studio and took to the stage, her voice tremulous as she exchanged greetings with the show’s presenter, Faisal Islam. As she looks out into the audience, her smile gradually fades and the mollusc-like similarity in her skin tone and eye colour is more pronounced. One after the other, she is asked questions by members and she responds to them in turn. “What Jeremy Corbyn is proposing is nationalisation and higher taxes for the wealthy. This is simply impractical!”. Her face shifts into showing a sort of crinkled exuberance. “Now this…” as she gestures toward a toothless child freezing to death “this is real politics”. Murmuring and heavy sighs can be heard from the viewers, they’ve known her to use this rhetoric before. Halfway through the questioning, she insists on going backstage briefly and is granted permission. After a momentary pause in the studio, she returns, hastily cramming tadpoles into her mouth and then indicates to Faisal that she’s ready for another question. After answering more, attempting to reassure the public with promises of strength and stability, Theresa May makes one final appeal to the audience: “Many of my colleagues have called me a ‘bloody difficult woman’, this is because when I have a principle, nobody will stop me in my determination to deliver what’s best for the people of Britain”. During her statement, she begins to twitch nervously and coughs from the spiders stuck in her throat, haplessly trying to recall what the next part to her culminating speech is. She creaks into a crotchety smile once again, “We make absolutely clear, no deal for Britain is better than a bad deal.”, the crowd erupts into frenzies of cheers, clapping and sobbing. The camera pans to them, they have arisen from their seats. Tiny bow ties are visible in the audience, along with dripping brows and a woman holding out her hands as though they are akimbo pistols and mouths “Boom!”. The camera operator reverts back to May’s face, “Subsume yourselves”, she utters under her breath, “You will all be eating dog food”. They have just applauded the abyss.