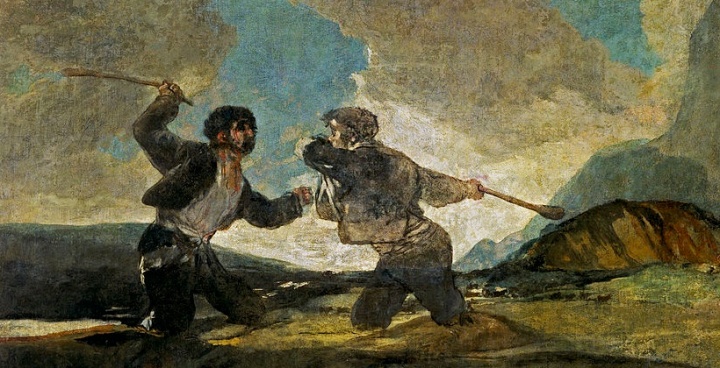 The United Kingdom is segmented, more than at any time in recent history. The SNP are planning another independence referendum, with the decision for Brexit being at its crux. This time, it looks likely that Scotland will decide ‘Yes’ for independence and with it, the English will plummet towards a Loch Ness-sized vat filled with boiling fluid to turn us into chips.

On the defensive from this and the European Union, Theresa May has recently called a general election and the country’s fracturing is even more pertinent. A frankly terrifying headline appeared in the Daily Mail on the day after the Prime Minister’s snap general election announcement: “CRUSH THE SABOTEURS” – this means ‘remoaners’, the majority of young people, the Labour Party, the SNP and anybody else who doesn’t have wet dreams about Theresa May spanking their botty with a wooden paddle. This isn’t being framed as a general election by those in government and the right-wing press, this is a culture war. A culture war, pitting the generations against each other and a grotesque Us vs The Other rhetoric is rife in UK political discourse. The response to the Tory’s ghoulish political playground of authoritarianism and right-wing nationalism must be cultural too.

Being ‘a millennial’ in these turbulent and testing times requires tenacity. My generation is branded lazy and entitled because we collectively show resistance to internalising a neoliberal work ethic which doesn’t provide us with security. We are labelled complacent and whiney and all the while, the British ruling class think that we “thin-skinned millennials need a spanking”. I think they just mean “smooth skin” but that wouldn’t be published on the grounds that it would be too perverted.

This generation are the first in nearly a century to be worse off than our parents due to a lack of job availability and stability. Disillusionment upon leaving education is very common and finding a space to think above the noise is difficult. More and more young people are seeking help for mental health problems due to these strains and their efforts are often ricocheted by under-funded service providers. With the consequences of the Conservative cuts to health (and education) budgets, as well as the problems caused by the political decisions such as the removal of housing benefits for 18-21 year olds, it’s no surprise that the UK ranked second from the bottom in a survey conducted to measure the wellbeing of young people.

The leader of the Labour Party, Jeremy Corbyn, has a vision for socialism (albeit a disarticulated one) in the UK. Corbynism represents the summation of a left movement, an alternative to the thirst for kill the young policies. Mark Greif writes that “to be against everything is to want the world to be bigger than all of it, disposed to dissolve rules and compromises in a gallon or a drop, while an ocean of possibility rolls around us. No matter what you are supposed to do, you can prove the supposition wrong, just by doing something else”. A vote for the Labour Party with even a vague amount of confidence in the leader for the forthcoming election is to be ‘against everything’ and while Corbynism is there, I’m voting for Labour.